A brief history of modern EVs in Windsor-Essex...

In October 2011 there was the first report of a Windsor driver purchasing a Chevy Volt, driving all the way to Toronto to pick it up because it was not yet available in Windsor. By 2012 the Chevy Volt was available at Windsor dealers and remained the only electric-drive vehicle on sale in Windsor until late 2013.

Also in 2011 was the first report of a Windsor driver receiving an all-electric Tesla Motors Roadster.  Since then there have been a few more Tesla vehicles shipped to Windsor, including the Model-S.

In early 2013 the first Ontario purchased pure electric vehicles started making their way to Windsor, including the Mitsubishi iMiev and the Nissan LEAF. Although not yet available for sale in Windsor, they were initially brought in from neighbouring London. These cars and more showed up at the annual EV event at the RET-Center in 2013.

In August 2013 the Windsor-Essex Electric Vehicle Association (and this website) was formed and started with 4 members.

As of March 2017 WEEVA has 90 members with 83 plug-in electric vehicles including vehicles from; Chevrolet, Tesla, Nissan, Ford, Kia, Mitsubishi, Smart, BMW, and Hyundai.

If you are aware of other key events related to EVs in Windsor please let us know. 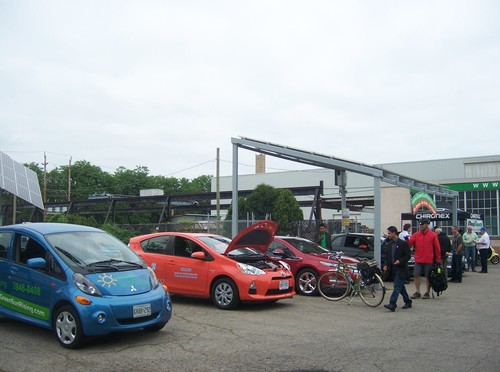 EV event at the RET-Center.